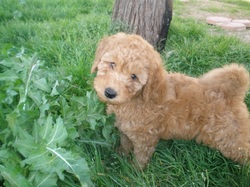 HISTORY OF THE LABRADOODLE:
A gentleman by the name of Wally Conron was the man behind the breed. In the late 80s, Mr. Conron worked as a puppy-breeding manager for the Royal Guide Dog Association of Australia. He received a request from a vision-impaired woman in Hawaii for an allergy-free guide-dog since her husband was allergic to dog hair. His goal was to produce a non-shedding guide dog by using a Labrador Retriever and a Standard Poodle. The result of crossing these two beautiful dogs produced intelligent, extremely low to non-shedding, easily trainable puppies that were the beginning of the Labradoodle as we now know it. To read more on the story, please visit The Australian Labradoodle Association of America website at www.ilainc.com. 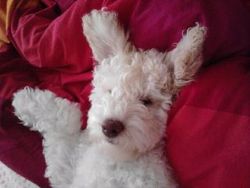 LABRADOODLE COATS:
The Labradoodle coat can vary from very curly to slightly wavy or even straight. This very curly coat can be wool or fleece, or a combination of the two. The wavy coat is called fleece, and the straight coat is very similar to that of the Labrador and is called hair. The color of the Labradoodle can vary as well. Colors include chocolate, chalk, apricot, cream, cafe, black, silver, and parti-colored. Both the coat coloring and texture will depend on the parents.
External Links:
www.puppypottytraining.net
www.dog-obedience-training-review.com
www.ilainc.com
www.australianlabradoodleclub.us
www.laa.org.au
www.labradoodle.org.uk
www.labradoodleclub.co.uk 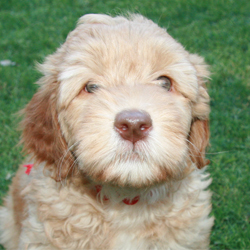